Morrie’s Place – A Piece of History

Morrie’s Place – A Piece of History 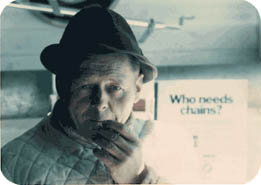 That sign is still against the telephone pole out in front of his farm, the same as it has been for the last 60 years.

Morrie was born in 1919 and worked the farm with his family, in Richmond, Illinois, just a mile south of the Wisconsin border.

Even as a young kid in high school, Morrie was buying, fixing and selling motorcycles. It was in his blood. His daughter, Ginger, tells of this from writings in her grandmother’s diary.

By the late 1940’s, Morrie was involved with a local Harley-Davidson dealer, and later branched off to open his own motorcycle shop in a tool shed on the family farm. It was only about 30’ x 30’, but it was a start.

He first became a dealer for BSA in 1954, in this humble, little wood building. Over the years, Morrie and his wife, Ruth, added on the marques of Triumph, Norton, Matchless, and BMW. They also added numerous additions to the tool shed.

The additions were done in a very innovative manner … farmers know this method … don’t waste anything. The ceiling on the inside says Triumph Motorcycles all over it. And “Ship to Morrie Gauger, Richmond, Illinois, USA“. They are “recycled” shipping crates.

He sold bikes like crazy – everybody new Morrie and Ruth, regardless of what brand they rode. They were both quiet, modest, and small of stature. They knew bikes and parts, and their building was filled with them. When they ran out of room, they started putting motorcycles in the dairy barn, filling the stansions where dairy cows had once been. 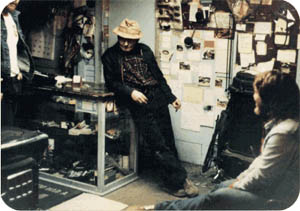 As time passed, all of the other outbuildings around the farm began to overflow with motorcycles and parts. Because of this, people knew that if they made the drive to Richmond, they were almost guaranteed to get what they needed. And they would have to make the drive, because even as of 1993, the shop did not have running water, a toilet, or central heat, let alone a phone or fax machine!

It was less than 100 miles from where I lived, and my old buddy Denny Perniconi often made the trip to stand around the wood stove and “shoot the bull”. Not long after Pixie and I got married, we went out there for her to meet Morrie and Ruth.

They would ride to our Woodstock, Illinois swap meets – Ruth on a 50’s pre-unit BSA and Morrie on an old BMW.

In the early 1980’s, a young Ed Zender started to come to the shop. He became a regular customer, and enjoyed hanging out at the shop whether he needed parts or not. He would often waste an entire Saturday, sitting around the stove and talking with Morrie and other regulars about motorcycles, places to ride, road trips taken, and mishaps and breakdowns that occurred along the way.

After the passing of Morrie and Ruth in 1993, the family decided to have an auction to sell the inventory as a lot. With the support of Morrie’s family, Ed Zender was able to purchase the inventory and rent the old tool shed to continue the business. Gauger Cycles became known as Morrie’s Place – as in, “I’m going to Morrie’s place to get some parts”.

Ed worked two jobs for about a year, both about 40 miles apart. 3 days a week at one job and 4 at the other. When word got out that the shop was open again, business picked up, and Ed was able to quit his “real job” and work full time at the shop.

Ed, a true student of Morrie‘s, chose to continue the business in the same fashion. In fact, many long-time customers comment about how the shop seems to have been frozen in time – if you can get past the addition of a phone, fax machine and central heat.

Twelve years later, with mixed emotions about leaving the farm, Ed and his wife, Lori, are currently building a new facility. They hope to start moving into it February, 2008. It will have a larger showroom to better display motorcycles, since they are currently jammed so tightly together that they can’t been seen. The parts and service areas will also be larger in the hopes of continuing to provide customers with access to the parts and service they need. The shop’s goal will continue to reflect Morrie’s passion – to keep vintage motorcycles on the road. Ed wants to do his part to promote and encourage the enjoyment of vintage iron. Morrie and Ruth would be pleased…

The hope is that the long time customers will now get together in the new location. They can talk about the appeal of the vintage motorcycles, knowing full well that the new models offer more comfort, power, better braking, and a vibration-free ride. Ed plans to decorate the showroom with a lot of period advertisements, memorabilia, original signage, and photos of the old shop. And you can bet there will be at least one old Triumph crate hanging around.

Ed invited Pixie and I out to have a last look at the old shop. During our tour, I was shown boxes of N.O.S. parts. Treasures, if one knows where to look. Ed and Lori do. Looking down the long rows of parts shelving, you can almost imagine Morrie and Ruth still around.

About the Author: Carla Baldwin